A May 20 Daily Record article reported that Secretary of the Environment Ben Grumbles plans to improve the Maryland Department of the Environment’s (MDE’s) customer service and perception among the business community while still furthering the State’s environmental goals. 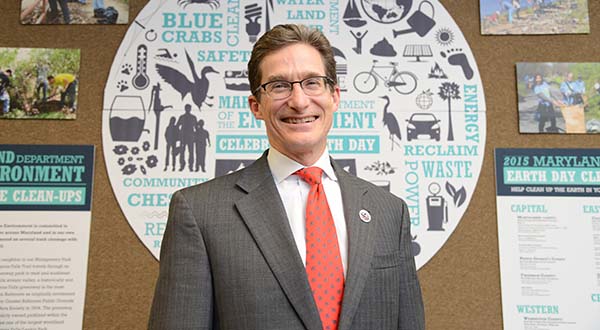 Ben Grumbles, Gov. Larry Hogan’s choice to lead the environmental agency, said his challenge will be to “accelerate the pace of environmental progress in Maryland,” including improving the health of the Chesapeake Bay, even as he attempts to improve the perception that his agency contributes significantly to what is seen as an unfriendly business climate in the state.

“The customer isn’t always right, the customer service is always right,” Grumbles said. “An environmental regulatory agency has to say ‘no’ at times. The key to customer service is to communicate clearly and effectively early on and to try to be a problem solver. If you’re going to say ‘no,’ try to say why and also explain what might change that ‘no’ to a ‘maybe’ or to a ‘yes.’” …

The article noted that the relationship between MDE and the business community was criticized during hearings held in 2014 by the Maryland Economic Development and Business Climate Commission (also known as the Augustine Commission):

The commission reported that complaints ranged from difficulties in dealing directly with the agency, including “frustrating, confrontational, inconsistent, time-consuming, arbitrary, and generally unhelpful” interactions; refusals to grant “common sense” exemptions; delays in decisions; refusals to explain decisions; and excessive uses of penalties and other legal actions.

Grumbles explained in the article that he will be to provide the public and businesses with more information through MDE’s website and create  an ombudsman to help businesses comply with environmental regulations. Grumbles also stressed that enforcement should not be MDE’s first option:

Enforcement will still be part of the equation, but Grumbles said it shouldn’t be the first option.

The first goal should be to provide compliance assistance, he said.

NACo Update on “Waters of the US” Rule Withdrawal