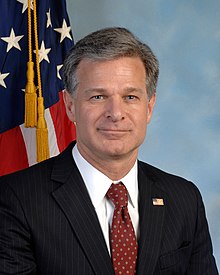 The Federal Bureau of Investigation Director Christopher Wray has noted unmanned aircraft — or “drones” — represent a substantial and escalating threat as implements of terror or crime.

The discussion was part of a scheduled briefing, held on October 10 before the United States Senate Committee on Homeland Security and Governmental Affairs.

From a report in Bloomberg news:

Drones pose a “steadily escalating threat,” as the “unmanned aircraft systems” are likely to be used by terrorists, criminal groups or drug cartels to carry out attacks in the U.S., FBI Director Christopher Wray told a Senate committee.

The full “Threats to the Homeland” hearing is available online on the US Senate website.

MACo is working with multiple stakeholders in developing a report on drones, their use in Maryland, and potential public safety concerns arising from them. The report arose from 2016 state legislation that, among other things, preempted local governments from regulation or oversight of drone usage.

Report: Managing the Cost of Government, New Tools for the New Normal